The 300i is the base model of a line of luxury touring spacecraft developed by Origin Jumpworks.

Its high-end amenities and design are targeted towards more affluent customers who prefer a visually attractive spaceship over a utilitarian one. Origin engineers made the basic frame adaptable, which has given rise to a number of role-specific variants. Current 300 variants include the 315p exploration craft, the 325a fighter and the 350r racing ship.[3]

Access to the ship:
The interior of the ship can be accessed via a retractable multi-step ladder on the port side (left).


Currently the components are not accessible.


The cargo area is located in the ship's belly and is accessible from the outside via a ramp below the hull.


In the interior there is a toilet cubicle, first aid kit, fire extinguisher, bed with screen, locker for clothes, weapon holder and kitchenette with sink, storage space and work surface, as well as the pilot's seat. 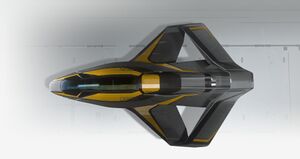 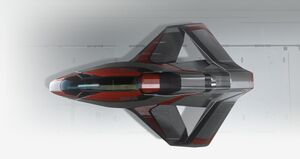 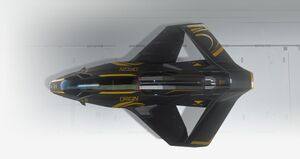 If you're going to travel the stars... why not do it in style? Origin Jumpworks' 300i is a sleek, silver killer that makes as much of a statement with its silhouette as it does with its particle cannons. Some accuse Origin of putting style over substance and raising the label price accordingly.... but at heart, the 300i is still an elegant tool for the two-man fighter.[4]

Origin's brand new 300 series is the manifestation of a feeling. It's the thrill of T4 engines pushing you out of the atmosphere. It's a rush as you wind your way through an asteroid field. That's when flight control becomes more than just a mechanism, when it becomes a part of you. At Origin, we design for you, not your ship. Origin's 300 Series is the ultimate fusion of elegance and power. Every component, every part is individually calibrated so that no matter what model and options you choose, your ship will remain in perfect harmony as the ultimate example of astro engineering.

In 2889, the Lang brothers were tired of the trend toward utilitarianism in the ships of their time. They wanted to bring aesthetics back into space. With this aspiration, they returned to the drawing board and began a creative process that eventually culminated in the construction of the X3 Prototype. The success of this ship, which became a cult symbol, became the source of Origin's civilian ship line.

The Langs didn't rest on the laurels of their success, however; instead, they continued to push their engineers to find the perfect balance between aesthetics and function. Over the next 30 years, Origin Jumpworks launched a series of spaceships that established the company's current reputation.

The latest 300 series is designed to build on the company's tradition and philosophy of harmonious synthesis of form and function. The Langs believed there was a place for beauty in space. The 300 Series continues to prove them right.

Save the complicated maneuvers for the outdoors: every part of a 300 series is exactly where you want and expect to be. At Origin, we pride ourselves on our commitment to focus on the pilot, rather than the spaceship. Every component of an Origin spacecraft, from the laser override, to the cockpit vacuum closure system, has been rigorously ergonomically tested by our own design teams, and tested for resilience within one micron tolerances. We are strongly committed to ensuring that your spacecraft feels like an extension of your body; take a 300 to find out what you've been missing.[1]

In the "Inside Cloud Imperium Games" video format, Eric "Wingman" Peterson looks at the development process of the Origin 300i in its first early version. [5]